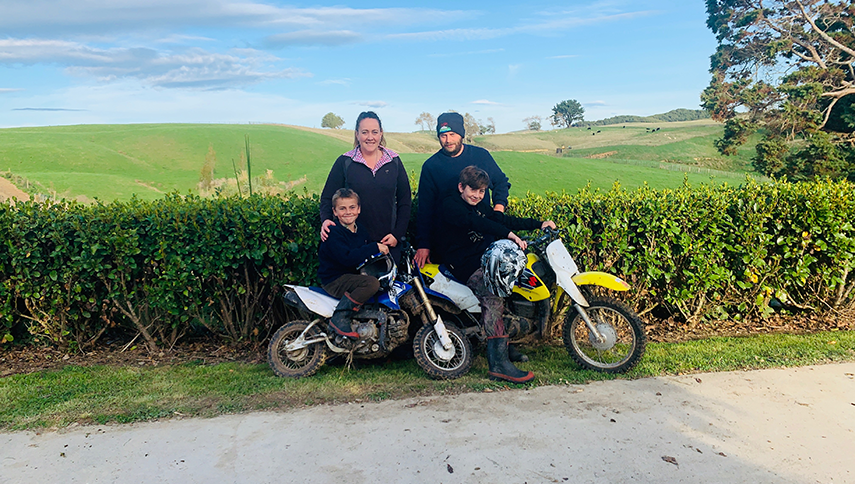 Thinking outside the box

Bex and her partner Steve are 50/50 sharemilkers. They’ve been on a farm in Pahiatua coming up two years.

Bex actually comes from a sheep and beef family but has grown to love the dairy lifestyle. “I’m the only dairy farmer in the family,” she laughs, “But once I learnt how to milk cows I chose the dairy path. I just love working with animals and being outside, driving tractors and learning about the area. It’s a neat way to bring your kids up too. We’ve got two boys, 11 and 8.”

Taking lockdown in their stride

Life in lockdown isn’t going too badly, but Bex misses the social contact that used to be part of her working day.

“We’re all pretty busy and let’s face it; a lot of farming is already done in your own bubble, isn’t it? So I went and picked up fertiliser as usual the other day, loaded up the tip trailer, put my strops on and just headed home again. So a lot of work’s the same, except you just can’t stop in for a cuppa on the way home like you used to, which is unfortunate because that’s how you find out what’s going on locally.”

“For example, we’re coming up to mating, sorting stuff out for that, which is usually done with a cup of tea going over the books. Now you have to find that information out another way.”

Dealing with drought, sourcing extra maize and getting stock to the works are the main headaches the couple are managing at the moment. Bex reckons farming people are so used to dealing with adversity; most will take lockdown in their stride.

“I think it’s a bit easier for us to understand the concept, because if there’s something in your herd, you don’t want it to spread. You shut it down. And you always have to keep up the hygiene side of things. We can relate to the big picture. As a farmer, you understand straight away why they are doing it.”

That still leaves the home bubble to sort out and kids to school. Bex has got creative. “For maths, we’ve been doing things like putting some maize in a tube to show them the difference between a quarter and a half when they’re learning fractions. I told the teacher and she said, ‘They’re going to be so bored with my maths when they come back to school!’

Bex admits she’s relished the chance to spend more time together as a family. “It was great having the school holidays early as they usually never fall when we’re free.  Usually the April holidays are when you’re trying to do heaps with mating and the July holidays fall when we’re back into the calving. So we loved the fact that we could do so much more with the kids. We made plastic boats and we have a creek at the end of our property so the kids had a blast down at the stream.”

With the usual social activities off the agenda, Bex and the family have headed to simpler pleasures. “We were really looking forward to booking a hunt during the roar season. And duck shooting. My husband also looks forward to going to the stock sales, even though he might not buy anything. Just to see what the market is doing and catch up with who’s there. And the kids are gutted that they won’t be able to play rugby. Now we’ve got to rethink all that and do something else.”

“So I got the marbles out and knuckle bones, the board games and card games. We’re lucky we have 174ha so we are still able to get out there. The kids have a lot they can do and have their two wheelers to ride. So I guess entertaining them is a lot easier for us than being in town. We’ve made tree huts, picked wild blackberries to make jam.”

“Lockdown just means you have to keep thinking a bit more outside of the box to create a routine and structure to your day that works for everyone.”

A problem shared is a problem halved

“Not being able to go out and have a banter with people is definitely a challenge. It’s tempting to just put your head down a bit more and work, but if you haven’t heard from a friend for a while then give them a ring and have a yarn.”

“I was talking to a lady this morning about not being able to get cows away to the works in the drought and what they were doing to try and deal with it. We’ve got four booked in and now they won’t be able to go for another couple of weeks.  And so you think ‘oh well someone else is in this situation too’.”

“I often think that when you’re stressed or under the pump you don’t think about the most obvious things, and it only takes someone to say something before you think ‘oh, why didn’t I think of that?’ In farming, a problem shared is definitely a problem halved.” 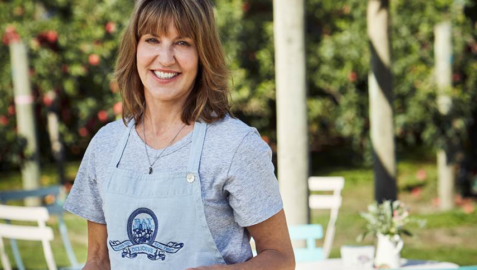 Although lockdown has made Marian Hirst’s blueberry business more challenging to run, it’s also made her appreciate why she loves the job.  It’s blueberry harvest … 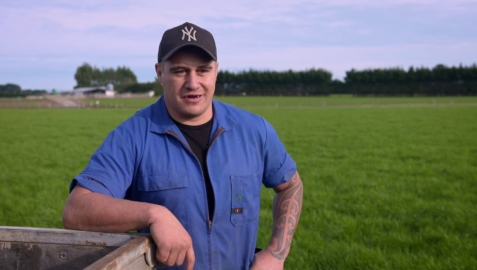 Farmer to farmer with Tangaroa Walker