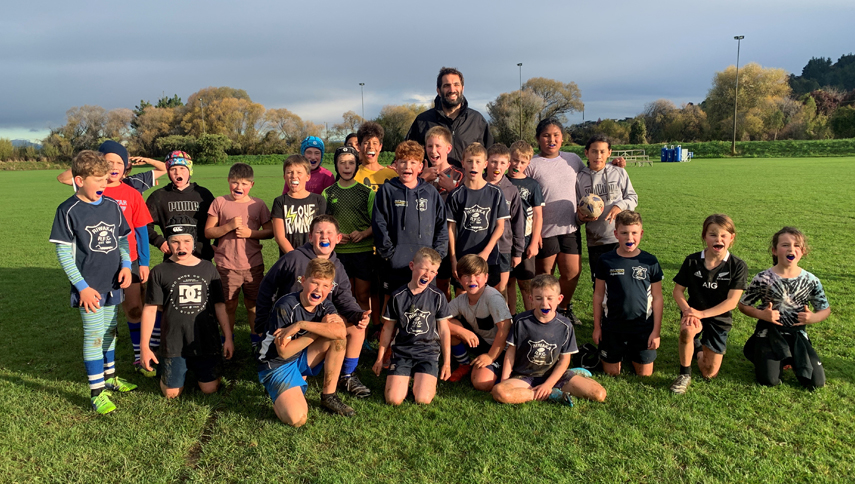 The restorative power of a chat over a cuppa was evident when Farmstrong Ambassador Sam Whitelock visited hail-affected growers in Motueka and Riwaka recently.

A freak Boxing Day hail storm ruined millions of dollars worth of fruit with some growers losing their entire crop. The storm was so heavy that hail remained on the ground in Motueka more than 24 hours later with growers describing hail the size of golf balls. The storm came on top of an already challenging year for apple, kiwifruit and hop growers who’ve been struggling to find labour due to Covid border restrictions.

Sam’s first port of call was Golden Bay Fruit in Motueka, the biggest apple business in the district. The company employs up to 500 people and has over 750 hectares of apple orchards and 100 hectares of kiwifruit as well as a state-of-the-art pack house, where fruit is sorted and graded using the latest computerised technology. The company, which exports to 25 countries, lost 90% of its kiwifruit and 40% of its apples in the January storm.

Managing Director Heath Wilkins described the impact the storm was still having on the business and wider community in terms of stress and dealing with uncertainty.

Important to keep talking and supporting each other

Whitelock, who comes from a farming background and owns a farm in the Hawkes Bay, shared some of the pressures his own family had faced in farming, including an outbreak of Salmonella in the dairy herd some years back. He highlighted how important it was to keep talking and check on those who might have ‘dropped off the radar and stopped communicating’ during challenging times.

“I know the hail storm has brought massive stress and pressure for this community. Hopefully us being here today can help start a conversation so people feel able to open up and talk about these things and support one another.”

“I know from my own experience in the rural industry, and also in professional sport, that just listening can be a huge help to someone who is feeling ‘under the pump’. So if you see someone struggling, start that conversation, ask them how they’re going and make time for a proper catch-up, whether it’s over a coffee or at the pub.”

After touring Golden Bay’s pack house and meeting staff, Whitelock headed to the Riwaka Rugby clubrooms to meet more local growers. Here he spoke about how he handles the pressure and setbacks of top level rugby.

“Pressure is pressure whether you’re a grower, a farmer or a rugby player. One of the best things I’ve learned is to ask questions and listen to people who have been through similar experiences before. There’ll be a lot of knowledge in this community about how to get through events like this, so make sure you tap into that wisdom and advice.”

Don’t let a setback define who you are

Sam stressed the importance of retaining perspective when reversals happen and spoke about how he’s handled unexpected losses in his career. “It’s important when you have a setback that you don’t let it define you. I know you guys only know me as a rugby player and rugby is a big part of my life, but the reality is I also have other things going on in my life so it doesn’t define who I am as a person.”

“The expectation is always there that we will win every game, but that’s not the reality. So yes, losing a rugby game still hurts but I tell myself, I’m still a father, a husband, a son with a great family. That’s the most important thing. Sometimes you’ve just got to accept your setbacks and move on.”

“One thing I’ve also learnt is that if you asked people, whether it’s in business or in sport, whether they’d swap their problem for someone else’s most people probably wouldn’t, because deep down they still enjoy what they do. They still want to benefit from the experience so they can get through better next time. So a setback offers that opportunity to learn as well.”

Sam encouraged the audience to give themselves some recovery time. “Pressure is pressure whether you’re a grower or a rugby player. How do I deal with it? I travel towards it, embrace it as part of my job and then, when I get the opportunity, I step away from it and make sure I recharge.”

“I’ve learnt, you can’t just go ‘hammer-down the whole time’, you need to step away. For me, I can head home into a different world after rugby, so I make sure I’m not just focussing on one thing only. If you’re only thinking about hail storms all day, every day, of course it will start to get on top of you. So it’s important to go and do something else whether it’s with your family or a hobby or catching up with mates outside the industry. Something different.”

Sam also spoke of the importance of retaining a sense of humour in the face of adversity. “I know from my own experience that just getting together with friends and having a giggle over a cup of tea after a tough event can work wonders. When you’re having a good time, it relieves the pressure and you start thinking, ‘maybe I can do this, maybe there is a solution to my problem.’”

And he explained how he likes to ‘keep things simple’ when the pressure’s on. “I think the best players I’ve seen at handling pressure are the ones who can just focus on doing the basics really well game after game, irrespective of the weather or the ref or pressure on the scoreboard. So I try and keep it simple and just concentrate on the things I’m good at. Yes, the country won’t be happy if we lose, but the reality is all I can do is my job to the best of my ability.”

The meeting ended on an optimistic note with one veteran grower sharing his confidence that the community would recover: “I’ve been through a hell of lot of hail storms, even worse ones, and one thing I’ve learnt is that we always come out the other side. And the good thing about farming is that we have a 12 month cycle, so we know our hops will grow again next year,” he said.

Whitelock wrapped up his visit with a coaching session for the Riwaka under 10’s and under 11’s on ball skills and tackling.

Summing up the day Whitelock said: “I grew up in a small country town like this so it’s been really nice to come here and share part of my story and the Farmstrong story as well.”

“It’s also been great hearing people share what they’ve been through too. I know myself, whenever there’s been a challenging time it’s nice to be able talk about it and share the load. Today was also a chance for people to stop and reset a bit and celebrate the hard work and resilience they’ve shown to get through.” 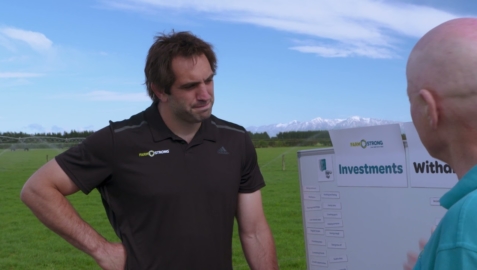 In this video Sam Whitelock reveals the investments he makes into his Wellbeing Bank Account so that when he’s going through tough times, he has something … 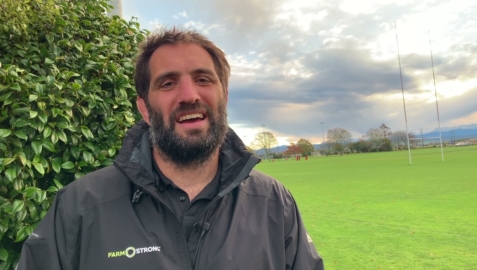 Farmstrong works in partnership with the NZ Shearing Contractors’ Association and its safety initiative Tahi Ngatahi to promote wellbeing in the wool harvesting industry. In …